Shopping Cart
Your Cart is Empty
Quantity:
Subtotal
Taxes
Shipping
Total
There was an error with PayPalClick here to try again

Thank you for your business!You should be receiving an order confirmation from Paypal shortly.Exit Shopping Cart

We would encourage everyone to become a POCA member, if you aren't already a member. Your membership in the national club helps fund your local chapter. You can download a membership application at http://www.poca.com/ Please help our club grow.

I love free Museum Day in Sacramento; so to have the opportunity to view a Pantera and go to the California Auto Museum at the same time was a good reason to drive to Sacramento on a Saturday morning. We arrived at the CAM at about 10:45 AM to find the parking lot already full! We were directed to wait for someone to leave and free up a parking spot. We opted to park on the street about a block away. On our walk back to the Museum, we were passed by Jeff and Robin as they were leaving the auto museum. We then received a cell call from Jeff. He had stopped in to see "Automobilia" where his 1974 DeTomaso Pantera is on display. He had offered to start up the Pantera but was told that there were too many people in the museum to do that. Too bad, that sound would have really impressed people! The display was made up of 16 Italian cars and 7 Italian motorcycles. Besides the Pantera there was 1960 Ferrari 360 GTC, 1988 Ferrari Testarosa, 2000 Ferrari 360 Modena, 1972 Maserati Bora, 1970 Maserati Indy, 1965 Maserati Mistral, 1964 Fiat 500 D, 1987 Lamborghini Countach 5000 SQV, and several Alfa Romeos. There were seven motorcycles, including different models of Moto Guzzi, Vespa, Ducati, Agusta, Maserati and Aprilia. My favorite after the Pantera was the Fiat 500D. I love micro cars. This car was the inspiration for "Luigi" in the Disney/Pixsar film "Cars".

The other special exhibit at CAM was "Dropped and Chopped". We walked that display as well since we are also members of the Rio Vista Delta Drifters car club. The Drifters is a local club for 1974 and older American cars. We were allowed to be members since the Pantera has the 351 Ford Cleveland and was manufactured as a joint venture with Ford. There was a lot of discussion about the Pantera before Jim was accepted in the Drifters. I know what some of you must be thinking about the Drifters name. It sounds like a "Rice Rocket " group. The name of the group has it origins in the 1940's when the original club was formed, when drifting had an entirely different meaning. This group was resurrected about four years ago and is going strong with about 40 members. While the "Dropped and Chopped" display was good, it was much smaller with only 9 cars.

After our visit to CAM, we went to lunch at one of my favorite places in Sacramento. Zocalo is a Mexican restaurant, but it is not your usual taco place. The food is very good. The service is excellent. Right now the restaurant is offering a great deal on Tuesday nights- $20 for a shared appetizer, two entrees , and a shared desert! If we lived closer to Sacramento we would be there next Tuesday night for dinner! Check Zocalo out at www.zocalosacramento.com . 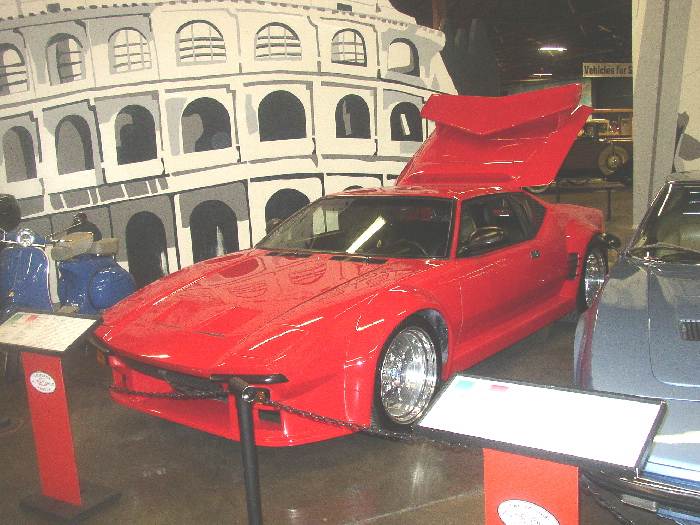 Obviously, the BEST of the Italian Automobilia 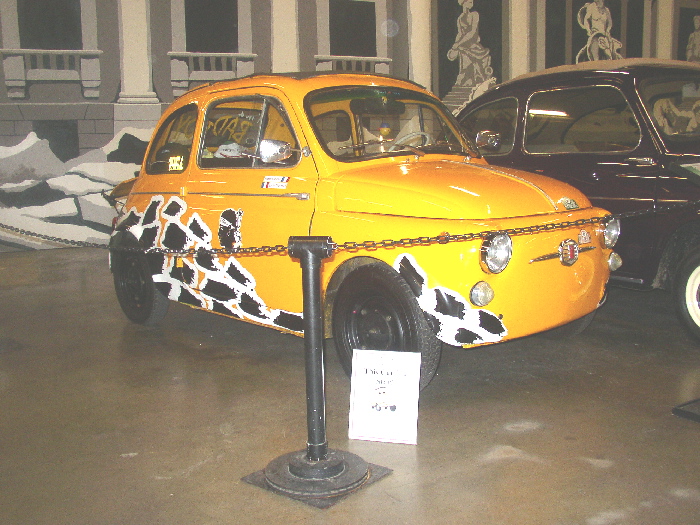 The Cutest of the Italian Automobilia

Some of the other car related topics discussed during the meeting included:

Garry and Sue also have a DeLorean, so Ken is no longer the lone DeLorean owner.

Ken reported that the last EuroSunday, in Sacramento, had 150 cars show up!

Jim is considering a different carburetor for the Pantera.

Don has the motor out of the Pantera.

Lamar plans to take his Pantera on the track at the Reno POCA gathering in June.

Rick will be doing the Tech check on Lamar's car at the CP tech session in April.

The February meeting had two Panteras and a Mustang in the parking lot at Mimi's. Lamar Fairchild and Garry Choate drove their Panteras, while Don was in his Mustang. Attending the meeting; Jim & Emilia Seiferling, Ken Montgomery, Rick Carlile, John Worsley, Don Gagnon, Lamar Fairchild and his lady friend Maureen, Garry and Sue Choate, and Steve and Merry Dalcino. We had the raffle for a $20 Kragen gift card. It was won by Jim. The driving for dollars prize for $10 was won by Lamar. John reported that he has reimbursed Duane and Darice for their Christmas party expenses. Thanks again to them for hosting a great party. We have $1027 in our treasury with all bills paid. Garry and Sue have recently moved to Wilton, from San Ramon. They are keeping their PCNC affiliation and have joined our chapter as associate members. Welcome Garry and Sue.

Please read over the Club calendar and mark your personal calendar so that you don't miss any of the Capitol Pantera events this coming year.

If you have attended a car function of any type, please write about your car adventures and send it to [email protected] to be included in the next Capitol Pantera newsletter. If newsletter articles are not received, then it will be more of Jim & Emilia's automotive adventures or "The Motoring Mouth".

Notes: Capitol Pantera member, Carl Stein, will be racing his Trans-Am Mangusta in the

not be running the car in all the races, so check with him to make sure if he will be

at a particular event.

Capitol Panteras member, Rick Carlile, will be racing his TVR in the CSRG Series.

http://www.csrgracing.org/ Rick has been accepted to race at the Sonoma Historic

May 7 Tour of the Jackson area. Chairman-Kathy Gagnon.

May 10 Capitol Panteras meeting at Mimi's

Please keep us informed of other dates and activities.

Life goal: To be the person my dog thinks I am.

"You're never too old to do goofy stuff."